From the Devil’s Farm 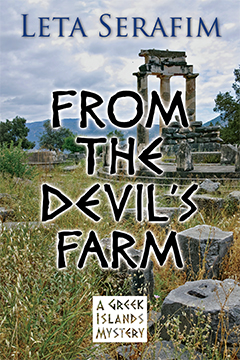 A Greek American tourist, Lydia Pappas, stumbles upon a child’s body in the ruins of an ancient temple, well hidden on the top of a cliff. The boy has been bled dry, though no blood is in evidence, leading the Greek police investigator, Yiannis Patronas, to believe the killer must have collected it. Greece’s financial crisis has reduced the police force on Sifnos to one officer, Petros Nikolaidis, so Patronas has been summoned from his home base of Chios to aid in the case.

Accompanying him are his colleagues, Giorgos Tembelos and Evangelos Demos, as well as Papa Michalis, an ancient Orthodox priest with a vast knowledge of detective fiction and an uncanny ability to ferret out the truth. Though eccentric and often irritating, Michalis has been an asset to Patronas over the years in a land where homicide was, until recently, a rare occurrence. But Greece is changing daily, with a tide of migrants straining the country’s already diminished resources and occasionally bringing out the worst in her people.

The child appears to have been sacrificed according to the rules of a pagan religious ritual. Is someone on Sifnos reviving the old ways? Or is there a thrill killer loose on the island? Is the culprit a Greek national or one of the many foreign migrants crowding its refugee camps?

When the Devil’s Idle 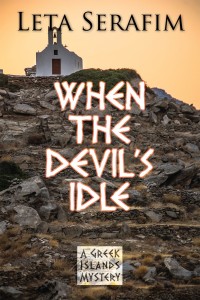 In the Book of Revelation, written by St. John on the Greek island of Patmos, it was said a pale horse would appear whose rider was death, others would cry out for vengeance, and the stars of heaven would fall to the earth.

Death does indeed come to Patmos when a German tourist is found murdered in the garden of one of the island’s fabled estates. Yiannis Patronas, Chief Officer of the Chios police, is called in to investigate. He summons his top detective, Giorgos Tembelos, and his friend and amateur sleuth, Papa Michalis, to assist him.

What the policemen discover will disturb them long after the conclusion of the case. Only six people were at the house at the time of the murder–the gardener and housekeeper, the victim’s son and his wife and their two children, a boy of seven and a teenage girl of sixteen. All appear to be innocent. But access to the isolated estate is severely restricted. Surrounded by high walls, it has only one entrance: a metal gate that was bolted at the time of the crime. Patronas can only conclude that one of the six is a killer. He continues to probe, uncovering the family’s many secrets. Some are very old, others more recent. All are horrifying.

But which of these secrets led to murder?

Book Two of the Greek Island Mystery Series is available on Amazon, Kindle, Nook, or in other ebook formats on Smashwords.

The Devil Takes Half 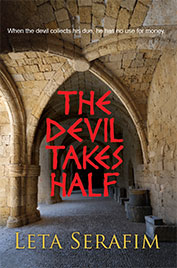 At an archeological dig on the idyllic Greek Island of Chios, a severed hand is found lying in a blood-filled trench. Could it belong to Eleni Argentis, a beautiful archeologist who is also the wealthy daughter of a local ship owner? She and her young assistant, Petros, are both missing.

The chief officer of the local police force, Yiannis Patronas, suspects that Eleni and Petros happened upon something of real value. However, his search turns up nothing but handfuls of broken clay, and then, another body—that of Petros, whose throat has been brutally cut. Body parts belonging to Eleni are left behind on a remote beach, confirming her demise. Then an old priest with a fondness for TV detective shows is attacked and left for dead. The dig site is located near the monastery where he was the only resident.

Patronas interviews Petros’ longsuffering grandmother, his flighty mother and her money-grubbing boyfriend, as well as Eleni’s greedy stepmother and her charming son. He also confronts two archeologists, one British and one American …. If Eleni’s find is, as they insist, worthless, what are these men doing on Chios? Although Patronas has little experience with homicide, he is determined to conquer the evil that threatens this formerly peaceful island.

Book One of the Greek Island Mystery Series is available on Amazon, Kindle, Nook, or in other ebook formats on Smashwords.